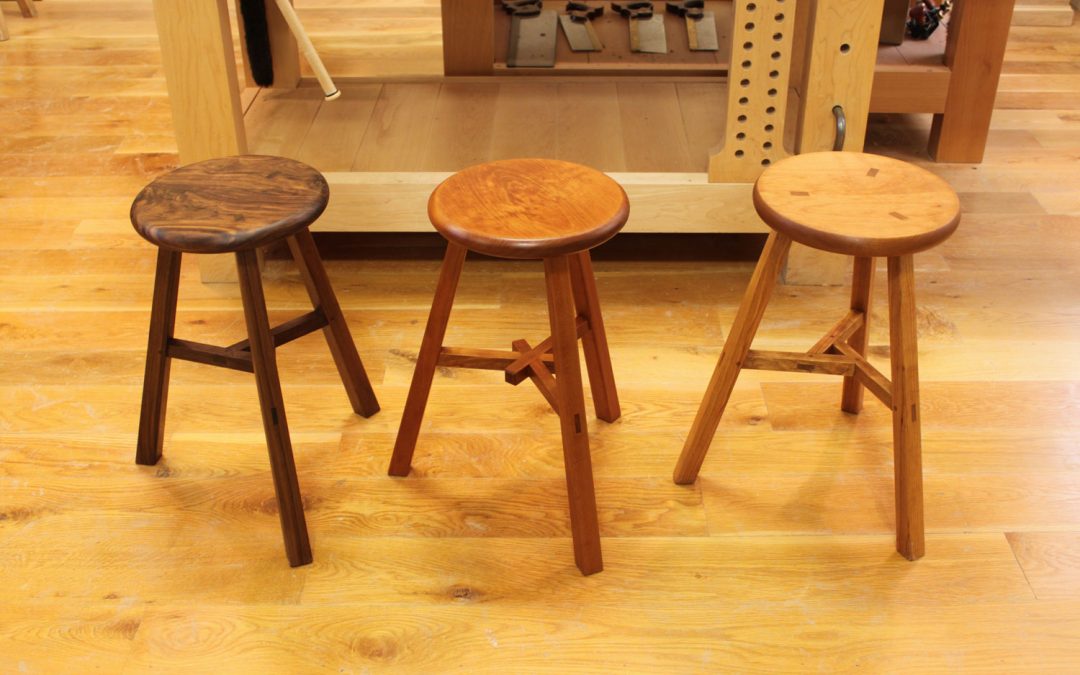 About 20 years ago I saw one of these three-legged stools at a client’s home. I was drawn to its simplicity, but at the same time the complexity of its joinery. I made up my mind right then that I would build one in the future.

It wasn’t until about 12 years later that I set aside the time and figured out the method for building one. I’ve now built eight of these, and I’ve taught workshops at local colleges and at the Marc Adams School of Woodworking, where I’m slated to teach again in the Summer of 2019 during a weekend workshop. I would estimate that over 60 of these stools have been built by students of mine.

I’ve built the stools a few different ways, including 100 percent hand tools, a blend of machine and hand tools, or all machine work. They are enjoyable to build regardless of the approach taken. They are also attractive and very useful in the home or shop.

Here are a few photos of the stools, including an original from the 19th Century, several of my reproductions, and artistic sculptures by the artist Ai Weiwei. Original 19th Century, three-legged Chinese stool, similar to the one I saw at a client’s home 20 years ago. You can see that it has withstood the test of time extremely well. Here are three stools I recently finished. The one on the left is made out of walnut and the other two are out of cherry. You’ll notice the center stool has a slightly different joint. It is a three-way lap joint. You can see in this close up of the walnut stool how you can have fun trying different woods and nice grain patterns for the top of the stool. Here is the three-way lap joint from below. I like this stool sculpture by artist Ai Weiwei. He’s done several of these sculptures. If you like the looks of these stools and want to see some photos of the actual construction, check out this blog from a 2013 workshop at the The Joiners Bench.